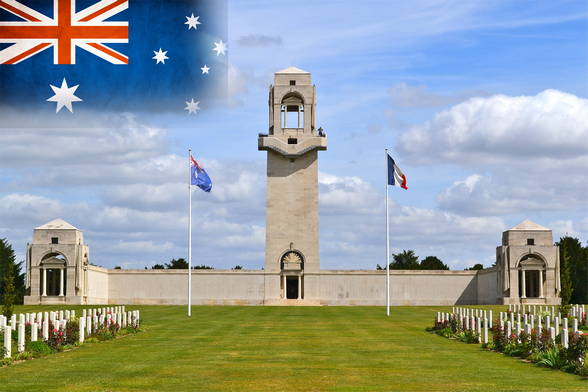 After the Great War all the Europe was left in ruins and the most excruciating battles took place in France. This land survived massive artillery bombardment, chemical assaults and lingering trench warfare. Troops from all over the world marched across the scorched earth to liberate it from the fearsome foe. Take our First World War tour to visit the places where the destiny of the world was decided.

Though enjoying its desolate geographical position, Australia couldn’t abstain from the war. Ready to support the British Empire, Australia dispatched a large expedition force to wage war against Germany. Their first involvement was in German New Guinea to repel the German forces in the Pacific.

Later on, Australian soldiers fought in Turkey, Egypt and Palestina. Then, united and reformed as an Australian Corps, they moved to France. There, on the banks of the Somme, these valiant soldiers fought in one of the bloodiest battles throughout the war. It was followed by the Battle of Bullencourt and the Battle of Ypres where the Germans used the notorious weaponized gases inflicting great casualties and even greater impact on morale.

All in all, Australia fought throughout the entire war in various WWI battlefields of the world. Breaking the backbone of the German army and subsequent victory didn’t come cheap ― more than sixty thousand Australian soldiers gave their lives overseas and twice that number were wounded. Follow the Australian itinerary with ComfortTours to see the places where people from all over the world met in horrible battles and don’t forget to give due respect to those who died for peace and liberty.

Going on a First World War tour in France

ComfortTours driver and the guide will meet you at your hotel in Paris at 7:30. Then your chauffeur will drive you to the destination of the tour, while guide will enlighten you on the essential Great War events and battles fought across the FrenchWorld War I battlefields, so that can follow the Australian Itinerary
well-informed. During your trip it is possible to make a stop at a roadside café for a short respite with coffee and French croissant (not included in price).

The first stop of the Australian Itinerary is Villers-Bretonneux is a place where the Australian and British armed forces met. The nearby village of Amiens was occupied by the Germans, but the very next day several Australian divisions were dispatched to deal with the problem. The operation was successful and the allied armies continued to push the frontline further into the continent.

After that you will arrive to the Adelaide Cemetery, designed and built by the Australian architects for the deceased Australian soldiers. When the war was over, much effort was put into recovering the Australian dead from graves all over France to move them to this honorary resting place. At the end, almost all Australian troops killed in 1918, were buried here.

After that, the guide will show you the Australian National Memorial which commemorates the heroism of the Australians ― known and unknown ― who died in battle for the freedom of France. Their valor at Somme and Arras made it possible to advance to the final line of the German defense ― Germany itself.

The Franco-Australian Museum is also a place you should visit on this tour. This museum is fully dedicated to the Australian war effort on the Western Front and boasts a large collection of exhibits.

At a nearby restaurant you will have a chance to lunch on world-famous French cuisine (not included in price) and take a break from sightseeing.

Once your strength is replenished, proceed to the next site is Le Hamel. This place served as a rendezvous point for the Australian Corps and Americans to deliver a crushing blow to the German army. Notably, that’s where the Australians showed their tactic skills at the full ― the commander of the joint offensive was from Australia.

If you have time, the guide will lead you to the Lochnagar crater ― a 100 feet wide crater left after the British military engineers used a mine to set off a massive explosion to destroy the German defenses.

The last but one point on our WWI Battlefields map is Beaumont Hamel ― a site of the bloodiest battle of the whole Somme campaign. To cap it all, we shall proceed to Peronne with its universally recognized Historic Museum, a modern treasury of the war relics.

And when the tour is over, the driver will take you back to the hotel.

Museum tickets included in the price.