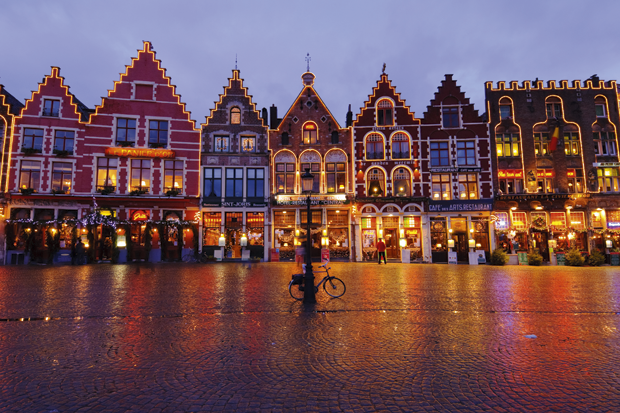 Paris is a wonderful city in the heart of Europe, which gives you an opportunity to explore beyond its limits into the other famous cities of the Old World. Bruges, a Belgian city of medieval origin is rightfully dubbed “the Northern Venice”. It’s 54 bridges across numerous canals and carefully preserved Gothic architecture is an excellent opportunity to get a realistic feel of 14th century atmosphere.

The original settlement can be traced as early as was founded in 840 by Viking tribes and was called “Bruggas”, which roughly means “landing area”. The town was strategically located at a river crossing and merchants of the old would gather there to exchange goods. As years passed, the town kept expanding at an astonishing rate. Being a principal town of the Flandria district, Bruges soon became an important commercial center ― it was a well-protected settlement directly accessible from the North Sea via natural waterways. Over time, these waterways grew clogged with silt and mud and it could have meant the end of the prosperity, but, luckily the Zwin canal still connected it to the sea.

The port got international significance after the Norman conquest: merchants from all over the world opened enormous markets to buy and sell their products of which Flemish fabric was the most notable one. Due to the city’s proximity, the noblemen would casually go Bruges for a day ― short trips from France were a common pass-time and often a business necessity. Naturally, the lucrative commerce allowed the traders to become wealthy: it easily helped them gain even more profits, build storage houses and accumulate political power.

Italy, Prussia, Scotland and Spain had their ambassadors and trade commissioners permanently present in the city, making it an all-European business capital. The prospering economy subsequently led to construction of architecturally unique houses and cathedrals with mural paintings by Memling and Van Eyck. The world’s first stock exchange was founded in Bruges in 1406.
The city couldn’t stay on peak of its might forever. By 16th century the Zwin canal deteriorated and the ongoing religious unrest forced many merchants to move to the bigger harbor of Antwerp. The prosperity dwindles and the once unrivalled city fell into slumber for several centuries. At some point in time, in the 19th century, it was the most impoverished town in the country.

However, if it weren’t for bad luck, Bruges would have no luck at all. Although bombarded during the two world wars, Bruges managed to preserve the most part of its historical splendor. People moved across the land to explore the medieval streets and buildings. The authentic atmosphere sank into the hearts of the visitors, and thus the flow of tourists has never stopped since that time. Now Bruges is a significant cultural center. Textile factories ― manufacturing exquisite lace alongside with linen, woolen and cotton fabrics ― still exist, the main source of the city’s revenue is tourism. Again, the advantageous geographical position plays an important role ― visitors come to Bruges for a day trip from France with Paris obviously being a major tourist attraction of the region.

Visit Bruges for a day ― trips from France

If you came to France for vacations, don’t miss a chance to experience a genuine medieval charm of good old Bruges. Your Guided day trips from Paris start at 07:00. A luxury minivan will park in front of your hotel to pick you up (if there are 1–2 of you, a comfortable five-seat car will arrive). A 3.5-hour long drive to Bruges will be accompanied with an overview of the city’s history which is actually captivating. The trip implies a stop at a café (not included in the price), so you won’t arrive tired and hungry.
The vehicle will stop at the heart of the city. The guide will give you a tour around the downtown including the Market Square, surrounded with numerous Gothic houses: each of them is a unique sight itself. Then you will see the market hall. In the years long gone, up to 400 merchants would gather here to offer their goods. Just imagine all the hustle and clamor! Don’t miss the opportunity to climb 366 steps of a 85-meter-high Belfry Tower to see the treasury. Yes, it is quite a climb, but easily worth the effort ― this panoramic view you will hardly forget. Besides, you will hear the chimes of 47 bells in the Carillon.

During the course of the tour, you will also see the statues of a weaver and a butcher ― two heroes of the Golden Spur battle that brought freedom to the city. These people are still alive in the hearts and minds of the locals. After passing the Smalltown Courthouse, you will walk across the city square between the governmental offices and the town hall that is almost 650 years old. The frontispiece of the hall displays the weapons used to defend the city, and the principal staircase leads you to the main hall. Here the most significant milestones of the city history are immortalized in many masterful works of art. Adjacent to the hall, there is the Court with two interesting statues and a chimney made of limestone, timber, and plaster.
After the Hall, the guide will lead you the Chapel of the Holy Blood named after the relic that was obtained during the Second Crusade. This building houses two chapels: the Romanesque chapel on the lower level, and the Gothic Chapel on the upper level. You will likely want to visit the both.
Once your cultural appetite is satiated, it is high time to try local delicacies at a local restaurant (dinner not included in the price). By the way, Bruges is famous for its breweries and vineyards.

The next part of the tour is a 45-minute boat cruise (not included in the price). You are going to waft the waves of the canal and marvel at obscure little shrubberies, gardens, and bridges which compose the touching scenery of this place.
Towards the end of your Bruges Day Trip from France you’ll have a chance to purchase some of the world-famous chocolate at one of the fifty chocolate shops. Take your time, try the samples and buy only the best from the best. After that, the driver will take you to Paris and drop you off at the hotel.